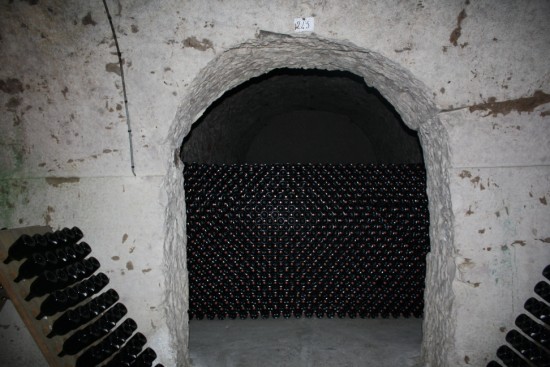 Champagne is a celebratory beverage that when produced by methode champenoise is very labor intensive.

Bottles of new champagne are stored on their sides in deep cellars in Champagne, France. This wine is now stored sur lie, or "on the lees" (the dead yeast cells and sediments trapped in the bottle). This aging process creates champagne's texture and the complexity of its bouquet. The amount of time Champagnes spends sur lie bears a direct correlation to its quality: the longer the aging, the more complex the bubbly.

Riddling racks are critical to the process of making Champagne. After the sparkling wine has aged on the lees or it' s yeast , it is ready to be finished. Remuage or riddling is the process that collects the yeast and sediment in a bottle and concentrate it near the mouth of the bottle.
After initial fermentation in the bottle, the bottles are inclined at a 45-degree angle on a riddling rack, which is made up of two simple rectangular boards hinged at the top. Each side is consists of bored holes, totaling six along ten rows able to hold the neck of a champagne bottle. This means each riddling rack can hold 120 bottles. Some riddling racks can hold more. The riddler puts the neck of a bottle of Champagne in each of the holes. A mark placed on the bottom of each bottle acts as a reference marker, with all markers on all bottles in the rack pointing in the same direction.
Over the next few weeks on a daily basis, the riddler rotates every bottle a few degrees which is an art unto itself. At the same time he raises the bottle's bottom slightly, lowering the neck maybe a centimeter or two each week. After a few weeks bottles that started at a 45-degree angle are now slanted to a 60-degree angle and are neck-down in their holes.

After riddling is complete, the Champagne bottles are then placed in a sub-zero solution for several minutes forming an ice plug made of the spent yeast and sediment in the necks. They are then are disgorged which means to remove the crown caps from the bottles resulting in the pressure within the bottles shooting out (disgorges) the ice plug (with the frozen sediment trapped in it).